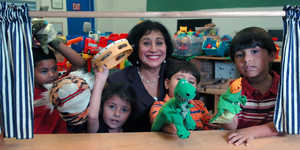 Too often we can get caught up in our own little world and forget that every living, breathing human being has a story to tell. Some stories are more shocking and unbelievable than others but there are people that we pass everyday or sit next to at work or talk to on the phone that have overcome such tremendous challenges in life and life goes on for them.

Such is the story of educator and administrator Dr. San Juanita de la Cruz. I have known this woman for more than ten years but it was only through a Miami Herald news article that I learned of the significance of her academic and social accomplishments. She is remarkable. Juanita makes me feel as though I have not done enough with my life. Through her trials and tribulations, she is one of the most pleasant individuals you will ever meet.

Thank God for this day of magnificent possibilities.

Tyler Perry’s New Movie May Just Make You Ask “Why Did I Get Married?” Tyler Perry has done it again. He has taken one of his plays and staged it for the big screen. Hollywood is taking notice of what Blacks in urban areas have known for some time. Urban theater sells. And urban theater transformed to the big screen makes big money.

The remarkable story of the numerous victories of Tyler Perry and his ever present sense of humility is the manifestation of the Blessing of Jesus Christ. He has overcome poverty, emotional abuse and homelessness among other things. Almost everything this man touches turns to gold. He is changing minds with the positive messages in all of his movies.

His movies can be a bit corny and predictable but the positive messages are desperately needed. It is bothersome to me that a Black man has to dress in drag for Black people to get positive messages on relationships, education and family, but that seems to be what is working.

On October 12, Perry is scheduled to debut, "Why Did I Get Married?" starring him along with Janet Jackson, Jill Scott, Michael Jai-White and Sharon Leal. Based on what I've seen on the internet, it's the story of four couples on an annual ski vacation during which their relationships are examined. You know there's gonna be drama when one of the cast is referred as a "trick".

The storyline will make it another number one hit for Perry. The acting and fine Michael Jai White will definitely fill more than a few theater seats. If this movie improves relationships, then we're all the better for it.

I'll let you know what I think when I see it. Meanwhile, check out the trailer. 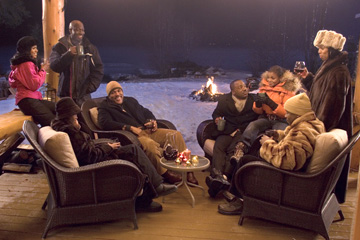 Attuned to he love of God, we radiate peace.

Through the spirit of God within us, we are courageous. 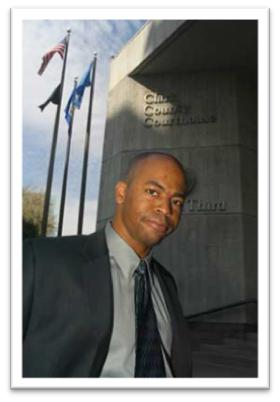 Remember my post a few weeks ago about being careful what you post in your blogs because it could keep you from getting a job or even get you fired? Well, it seems there's a controversy brewing in North Las Vegas about just that issue.

Check out Paula Neal Mooney's post on Pro tempore (substitute) Judge Jonathan MacArthur losing his job because of comments he posted online on his MySpace page. MacArthur, 34, is a criminal defense attorney with an aspiration for election to permanent judgeship.

MacArthur was removed from his post but quite frankly he should have seen that coming. Although not a permanent post, the pro tempore judgeship is public position and the individuals that serve in that capacity must be unbiased in perception and in fact. With that public position is also the loss of a certain level of privacy. Like it or not, that's the way it is.

MacArthur asserts that DA Roger has ulterior motives regarding MacArthur and his political future. That may be true because it seems that MacArthur could have been afforded a warning of some sort or at the most a brief suspension.

Attorneys and judges have lives but posting biased comments in a public forum, even in an attempt at humor, are not worth the potential hassle later. MacArthur has wisely set his MySpace page to private. Roger could have handled it differently but time will tell in this situation if MacArthur follows through on his intention to run for judge.

God's love is uniting us in peace.

We are expressions of peace and goodwill in the world.

From the Wall Street Journal: The Impoverishment of American Culture

And the need for better art education.

I don't think that Americans were smarter then, but American culture was. Even the mass media placed a greater emphasis on presenting a broad range of human achievement. I grew up mostly among immigrants, many of whom never learned to speak English. But at night watching TV variety programs like the Ed Sullivan Show, I saw--along with comedians, popular singers and movie stars--classical musicians like Jascha Heifetz and Arthur Rubinstein, opera singers like Robert Merrill and Anna Moffo, and jazz greats like Duke Ellington and Louis Armstrong captivate an audience of millions with their art.

The same was true of literature. I first encountered Robert Frost, John Steinbeck, Lillian Hellman and James Baldwin on general-interest TV shows. All of these people were famous to the average American--because the culture considered them important. Today no working-class kid would encounter that range of arts and ideas in the popular culture. Almost everything in our national culture, even the news, has been reduced to entertainment, or altogether eliminated.

Continue reading "From the Wall Street Journal: The Impoverishment of American Culture " »

Let there be peace on earth, and let it begin with God's love in our hearts.