Foolishness in the Land of Mickey: Vandals Paint Anti-Obama Messages on City Vehicles

I guess this is a sign of what we'll deal with for the remainder of the presidential campaign. It seems that some 60 vehicles belonging to the City of Orlando were vandalized with spray paint. Some of the vehicles had anti-Obama messages painted on them even with racial epithets. The gas tank door was open on many of the vehicles but damage to the gas tanks was not reported.

It's interesting that more than a hundred business cards were left with messages critical of Barack Obama and John McCain but complimentary of Hillary Clinton. Some folks just really need to let it go. It's obvious that someone really has a bug up their butt about Barack Obama's candidacy.

I really hate to see Florida shown in such a negative light --- again --- but it is what it is. Since Barack Obama couldn't be beat based on his platform I guess someone's going for old-fashioned fear and intimidation of voters.

Now, it seems likely that the perpetrators should be caught. One would think there should be security measures in place to at least capture the vandals on camera. The vehicles were parked near City Hall.

There have been other incidents of vandalism of Obama's campaign headquarters; those incidents did not garner the media coverage of the Orlando incident.

The Kick-off of the Obama-Clinton Unity Tour: Awkward but Necessary 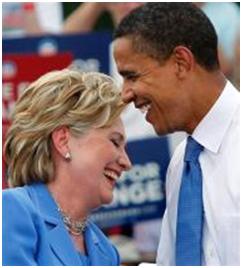 As the Obama-Clinton Unity Tour kicked-off in Unity, NH on Friday, I could only think of how forced the demonstration of unity must have been for the two former rivals. They did a decent job but it wasn't an Academy Award-winning performance. The next four months will likely be peppered with many such appearances as the Democratic Party tries to show a united front for the general election November. Hopefully, Senator Clinton will become a lot more supportive as she appeared to be the more feigned in her delivery and that's understandable.

To compromise personal feelings for the sake of the Party but stay focused on your personal goals must be extremely challenging. I applaud all of the candidates because no matter how strongly they try to convince others that the jabs they received during the campaign were just part of doing political business, they had to be hurt and angry at times.

It seems that one person crucial to the success of the Unity Tour is none other than President Bill Clinton. It appears that he is not yet able to conceal his personal feelings regarding how this campaign turned out. More than the loss by the senator appears to be his inability to deal with his tarnished reputation, especially with blacks. Sure, his honorary black man card was rescinded during the primary but sulking is definitely not going to help him or Hillary in the long run.

One thing is certain; mo matter the interaction between Obama and Clinton, they are still less awkward than John McCain.

After watching the coordinated heckling of John McCain at his kiss-up session to Hispanic elected officials yesterday, I had to find out more about the women's organization called CODEPINK. Of course, if you've read this blog for awhile, you know that pink is my favorite color so I'd be attracted to this group anyway.

After perusing their website and checking the issues and campaigns they are dealing with and have already addressed, I must say that I am impressed. In addition to the war in Iraq, they also tackle the crisis in Darfur and our country's military recruitment tactics among other issues.

Now, I must point out that I didn't see nearly enough black women involved. I'm not sure what that's about so I'm giving an extra nudge to my sistahs with a request to get involved. I do know that I like CODEPINK's spirit and tenacity. Unfortunately, there's not a local group in Miami or I'd definitely get involved locally. I'm not one to heckle someone, even John McCain, but I do get the passion behind pushing the CODEPINK agenda.

I'd be remiss if I didn't point out that CODEPINK is open to all women and even the few men courageous enough to get involved. OK, that was a dig at the guys but I couldn't resist. These ladies have given the color pink a whole new image and I thank them for it.

CODEPINK will likely become an even more formidable force to deal with so stay tuned and see what these folks are up to next.

Rev. Kirbyjon Caldwell launched a website, "James Dobson Does Not Speak For Me." , in response to recent attacks by Rev. James Dobson on Senator Barack Obama. Rev. Caldwell has already secured more than 10,000 signatures on this statement:

James Dobson doesn't speak for me.

He doesn't speak for me when he uses religion as a wedge to divide;

He doesn't speak for me when he speaks as the final arbiter on the meaning of the Bible;

...What does speak for me is David's psalm celebrating how good and pleasant it is when we come together in unity;

Micah speaks for me in reminding us that the Lord requires us to act justly, to love mercy and to walk humbly with Him;

Rev. Caldwell recently officiated the wedding of first daughter Jenna Bush. He is also the leader of the largest Methodist congregation in the United States.

I applaud Caldwell for his quick response to Dobson's attack. There are enough citizens who are tired of this kind of politicking who can shut Dobson's personal attacks and prevent Obama's campaign from being distracted.

I live in Florida where there has been a lot of controversy on our governor's flip-flop on the issue of offshore oil drilling. Yes, we know that Governor Charlie Crist is on the McCain VP short list and this flip-flop aligns him with McCain's position on the issue.

Of course, environmental activists have loudly and frequently proclaimed that increased oil drilling will not change much in our lives in the bear future regarding gas prices. They go on to talk about the threats to the environment oil drilling brings.

In doing my research on the topic, I surfed across a great site called How Stuff Works. It was very detailed about offshore oil drilling and I suggest you check it out if want to know how it works. There's also coverage of gas prices that I must check out later.

Hillary Clinton amassed a $22 million debt in her failed campaign for the presidency of the United States. This is not a post to bash Hillary Clinton but that's a lot of debt. Notably, $12 million of the debt is money she loaned to the campaign with more than $4.6 million the $10.3 million remaining owed to chief strategist Mark Penn's consulting firm.

Barack Obama has asked top contributors to help Clinton retire her debt. I also pray that the small businesses affected by this are paid for their goods and services. Those businesses are already dealing with an economy that has been particularly brutal. 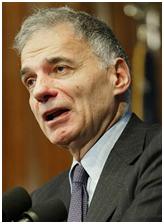 When I saw the headline about Nader, initially I was really pissed off. It brought back childhood memories of many exchanges with other black kids about the same subject. I won't go into details but being told that when I was a kid usually lead to an argument, a dozens contest and sometimes, but rarely, an actual physical fight.

It's not certain why Nader would utter such incendiary language but he did. It turns out that Nader didn't mean talking white the way most would interpret it but was describing Obama's position on issues and his lack of an agenda dealing with issues that significantly impact Blacks. Nader also accuses Obama of appealing to white guilt.

OK, so this is how we'll spend much of the general election phase, dealing with issues of race. The fact of the matter is that Obama has addressed the very same issues Nader accuses him of ignoring in an effort to appear to be a 'non-threatening black'. Nader would be advised to use another tactic to generate free publicity for his campaign.

Recent poll results show that Barack Obama leads John McCain by some 16 points. That's quite an accomplishment in a heavily Hispanic and Republican area. Some Cubans are angry that Obama's campaign team includes two guys instrumental in the return of young Elián Gonzalez to his father in Cuba.

Elián's mother died during an attempt to escape to America about 8 years ago. He was cared for by his mother's family in Miami but was eventually returned to his father after a court battle. Anyhoo, it was rather ugly after the little boy's return to Cuba. His recent pledge to communism rehashed painful emotions among Miami Cubans.

Obama's lead and support by Hispanics is a testament to the call from change by even traditional GOP supporters.