Thank you to U.S. Rep. Bennie Thompson, [D, MS], who plans to hold hearings into the distribution of $85 million in supplies to agencies such as prisons, school districts and states that were purchased for victims of Hurricane Katrina more than two years ago.

FEMA has some big time explaining to do --- again. It's unfathomable that they could commit such a faux pas until one realizes that Louisiana turned down the supplies although thousands have not yet recovered from the devastation of Hurricane Katrina.

The State of Mississippi accepted supplies but did not give them to Hurricane victims. One could put this in the "What in the hell were they thinking" category but just investigating doesn't seem sufficient without a penalty for those guilty of not distributing the supplies to the intended recipients in the first place.

In 1984, Rev. Jesse Jackson referred to Jews as 'hymie' and New York City as 'Hymietown' during a private conversation with a black Washington Post reporter, Milton Coleman. When the comments were printed, Jackson initially denied making them but later confessed and made a public plea for forgiveness.

One would think that after that controversial episode and many years of public speaking appearances; Rev. Jackson would be mindful of two basic rules: always assume that the camera and mic are on and nothing said to a reporter is really "off the record."

So why would Jackson commit this latest gaffe by dissing Obama while at the FOX News studio? It's one thing to say Obama is talking down to black people but what's with the comment about cutting his nuts off? That, I don't get.

I also don't get the attempted downplay of Jackson's comments by black leaders. Even the awkward statement by Jackson's son doesn't really hit the mark.

For what did Jackson apologize? If his original whispered comments reflect the way he actually feels; so be it. There are others who agree with Jackson; I am not one of them.

Some pundits feel that this latest episode will benefit the Obama campaign by increasing Obama's appeal to Independents and other voters who are not current Obama supporters. That remains to be seen.

In the meantime, Jackson has delivered his apology and the beat goes on.

Is the Barack Obama Kool-Aid losing its flavor? 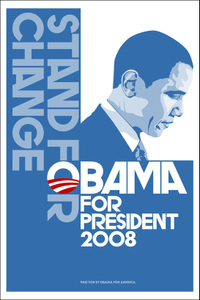 It goes without saying that I've been a Barack Obama fan since early in his campaign for POTUS. I've supported him financially to the max during the primary and via every opportunity to engage in a discussion on politics which is a move I typically avoid but this election, this time, is so much more important than usual.

That being said, I must say that I agree with most, not all, points addressed in a recent New York Times op-ed piece critical of Obama's perceived move to the center. That's not what I signed on for; I signed on because of passion and his courage for change.

Senator Obama is at a critical juncture in his campaign; I think I understand his strategy even if I don't like it. He is trying to get elected; it's just that simple. That is the prize. I get it.

One position I take issue with is continuing President Bush's public funding of faith-based initiatives. Obama's twist on non-discrimination in employment as a condition of funding is all well and good but it's also obvious pandering to religious leaders for votes and at what cost?

While I support Senator Obama's campaign, I'm also cautiously watching his moves and waiting with bated breath for his VP selection. In my humble opinion, American voters are left with a very lop-sided choice between Obama and McCain, but Obama jeopardizes the support of many young people who may lose the passion for change he so cleverly aroused in that demographic early on. He may also lose the passion of the not so young voters desperate for positive change in this nation.

I've even noticed the Obama campaign commercial running here in Miami that is conspicuously devoid of blacks except maybe one person in the background of one shot. Every time I see it; as a black person I feel left out and that's not cool no matter the candidate. While he must not be marketed as the "black candidate", he should not exclude blacks either.

I know that regular readers of this blog are surprised that I wrote this but I have to stand by my principles of giving my opinion "straight…no chaser." In the meantime, while I want Obama to win, let the record show that I prefer the original Obama Kool-Aid because this version is losing its flavor.

Arianna Huffington of the Huffington Post, has penned an article on Seven Things Barack Obama Should Do to Keep from Blowing It that I find a great read and quite inspirational. Hopefully the Senator will heed some of her advice. What say you? 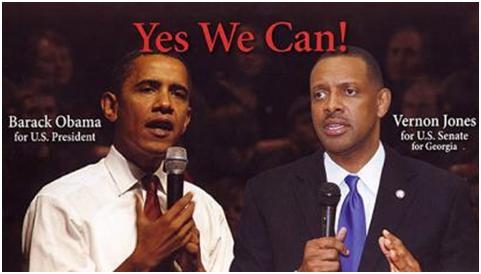 Georgia senatorial candidate and DeKalb County CEO Vernon Jones may have tanked his chance to win the five-man race because of a digitally altered photo in a campaign mailer invoking Democratic presumptive presidential nominee Barack Obama.

Jones' opponents are crying foul and a statement from Senator Obama's camp indicates that he will not endorse any candidate in the race.

Jones is the only black in the race with four white guys in a state that Obama won during the primary with 66% of the votes. He invokes helping Obama when he's elected yet he is a conservative Democrat. Jones did not endorse Obama until after he was the obvious presumptive nominee.

The controversial mailer is already in the hands of Georgia voters. Jones proclaims to have only received positive comments about it but a July 15 vote will determine which of the three Democrats will advance in the race.

This mailer is either an example of Jones' naivete or his questionable character; either way it's just wrong.

Starbucks: A store closing near you? 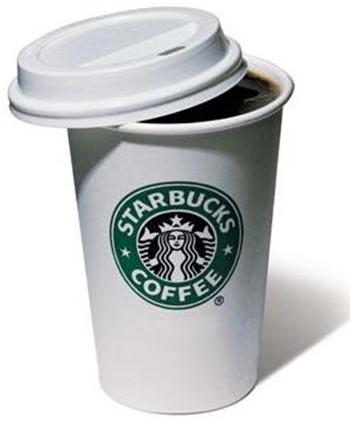 There was a recent announcement that Starbucks will close 600 under-performing stores resulting in lay-offs of about 12,000 employees. The impending lay-offs and store closings really come as no surprise but probably not for the reason you make think.

Rising fuels costs and the resulting increased operating overhead do play a role but the real culprit is management. They drifted away from the company's evaluation formula when opening new stores and chose to open stores to close to existing stores and in areas that could not produce sufficient sales.

Things had gotten so bad that Starbucks had to bring back CEO Howard Schultz to turn the company around. Schultz is already implementing plans but those plans will not preclude the store closings.

Not knowing if your Starbucks store is on the list to be closed is all the more frustrating but announcements should be made mid-July.

North Carolina Senator Jesse Helms passed away today for an undisclosed reason as to his cause of death. He was 86. Helms was conservative and a segregationist. He opposed so many things that he became known as 'Senator No'.

In spite of his opposition to many things not White, American and male; Helms served as a senator for 30 years before he retired in 2003. When his re-election was strongly challenged by Harvey Gantt in 1990, Helms ran the ad below that literally swiftboated Gantt's choice to unseat incumbent, Helms. Gantt was the mayor of Charlotte and black.

Helms opposed funding to assist AIDS victims; he made a very unkind statement about them which he later retracted after meeting and talking with activist Bono.

Popular Florida governor to wed in the Fall

Popular Florida Gov. Charlie Crist, 51, recently became engaged to Carole Rome, 38, who he met in September of last year. The couple is scheduled to wed in the fall.

Now, let's be real about this; Gov. Crist, whom I happen to like, is treading a slippery slope in his quest to become John McCain's running mate. Crist's flip-flop on offshore oil drilling raised a stink among environmentalists and now this latest move will likely draw his critics out in full force.

Crist was married briefly while in college more than 30 years ago. His bachelor status has been a problem for his political career as have long-standing rumors of his homosexuality but he has overcome them.

Inarguably, Crist is charismatic. He enjoys popularity in Florida across all demographics which is why he's on McCain's short list. I'd love to see him continue to defy expectations and remain single but it seems as though he's marrying to further his political career.

On the other hand, since he's still in the VEEPstakes, it's probably better to let the rumors come out now rather than waiting until closer to the election. It's still disappointing that the governor appears to be pandering rather than retaining his somewhat maverick flavor which is what many folks like about him in the first place.

Did you know that I'm running for president?

My brother played this joke on me. The video is really cool. Now, you can prank your friends. Enjoy.