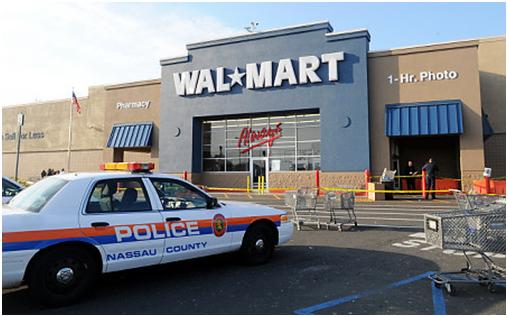 A temporary worker was trampled and killed at a Long Island, NY Wal-mart store. Hundreds of people stampeded the door, trampled the worker and even tore doors off the hinges. Those big metal doors torn off the hinges? What kind of foolishness is that? Since shoppers have said there was no organization for controlling the crowd or any security present, Wal-mart is likely looking at a lawsuit. A pregnant shopper was hospitalized because of the turmoil but it seems that she was okay. 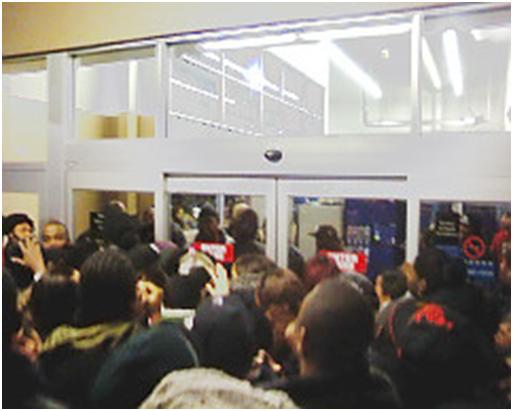 Shoppers were said to have stepped on the worker or over him or around him. "Savages" was a term used to describe the shoppers.

What was your Black Friday experience?

I was so caught up in the General Election that I neglected to let you folks know that Vanessa: Unplugged! was listed among 60 Influential Black Political and Social Action Bloggers by AAPP (African American Political Pundit). It's quite an honor to be included among many blogs and bloggers that I truly admire for their political analysis, commentary and work for the collective.

Government and the Ten Commandments 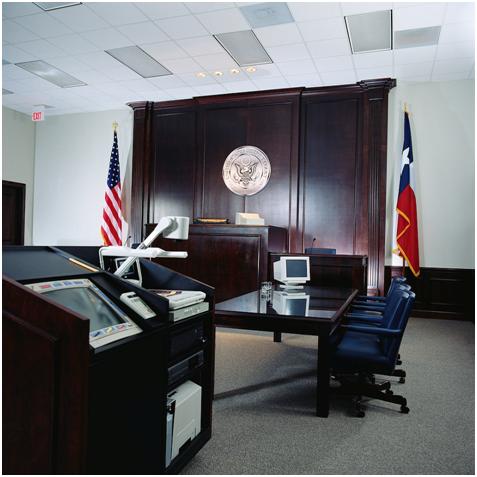 I saw this over at What's On My Mind Today. It is priceless and I had to share it with you.

The real reason that we can't have the Ten Commandments posted in a courthouse or government building is this:

Now you know that's funny. No offense to my friends that are lawyers, judges and politicians; I'm sure you've heard worse.

Thanksgiving Interrupted by Terror in Mumbai

Today's Thanksgiving Day post has been interrupted by the carnage and terror in Mumbai, India. Many are dead with more many more injured. The lack of communication with hostages only lends itself to allowing one's imagination to takeover and that's not a good thing.

It has been reported that the terrorists singled out Americans and British. The terrorist grouping claiming responsibility for these latest acts is unknown to American intelligence. Instead of watching the usual historical Thanksgiving propaganda, our broadcast and print media is being held hostage by this foolishness.

Of course, President-elect Barack Obama is being drawn into the mix by media analysts. It's likely he'll be blamed for this by Rush Limbaugh since he already blamed Obama for our economic crisis.

Mumbai is the financial capital of India so there's no telling what the ripple effect will have on the the United States and the rest of the world. Please pray for an expeditious resolution to this situation and for the victims and their families.

And now back to giving Thanks for family and friends...

Poll: Who Will Be the Next Leader of the Republican Party?

The Republican Party is obviously in rebuild mode after the shellacking they took in the last General Election. The move to claim the title of leader of the Party seems to have begun with moves by Sarah Palin, Mike Huckabee and Mitt Romney.

Even if the Party is not addressing the issue, the campaign for 2010 2012 has already begun. Who do you think will be the next leader of the Republican Party? Take the poll below. If your choice is not listed, be sure to let me know in the comments section.

The General Election That Will Not End, Part 2: Georgia

The Georgia Senate run-off election between Republican incumbent Saxby Chambliss and Jim Martin is in full effect during the last few days of this campaign. Neither gentleman garnered enough votes during the General Election so here we are in the midst of a run-off.

Republican superstar and Alaska Governor Sarah Palin continues her obvious campaign for 2012 by campaigning for Chambliss on the eve of the run-off. I guess that Thanksgiving turkey slaughter wasn't a big deal for the Georgia Republicans after all.

All eyes will be on this race as the Republicans are trying to keep the Democrats from attaining total domination in both houses. Palin is scheduled for campaign stops on Monday, December 1 and voting is the next day, December 2.

Oh yeah, the Republicans are using the socialism schitck to convince voters to support Chambliss instead of Martin. Prayerfully Democrats will show up at the polls and vote for Martin. 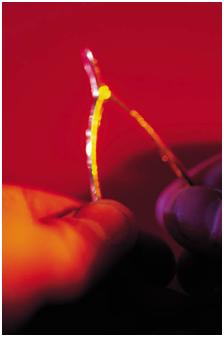 Today is the day before the day before Thanksgiving. Folks are talking about their Thanksgiving plans and trying to remain pleasant and upbeat. The reality is that folks are losing their jobs all over the place. The signs of desperation in this country are sometimes unbearable if we're paying attention.

We are Americans and we will overcome this bad economy but the fact of the matter is that most of us have not experienced an economic downturn of this magnitude. It would be wise for us to read or re-read an American history book right about now. No matter how bad it is in this country, we are still way better off than most of the rest of the world.

President-elect Barack Obama has inherited a country so devastated by overspending and lack of oversight that it's just unreasonable to expect people who have been evicted or very well soon be to understand economics and why the government should continue to contribute to these bailouts for banks while forcing the auto industry to present a plan before bailing them out. All of this talk about Wall Street, Main Street, side streets and back streets means absolutely nothing but more talk.

I've worked for government for many years. You know the comments about lazy government workers and two-hour lunches….blah…blah…blah. Well, inarguably there are some folks that live down to that reputation but there are far too many others that don't.

Then, enter private industry. No, let's be more specific --- the heads of the Big Three auto companies with hat in hand and no plan. I guess they thought they were Lehman Brothers or AIG but anyway the answer was no; especially since each of them flew in on a private jet for the hearing. See, it's that kind of foolishness that just deserves a beat down. Talk about out of touch with reality. I've worked in private industry also. There was no excuse for the private jets. That spoke volumes about them as individuals and leaders. No wonder their companies are in such bad shape. And this is an example of the superiority of business and private industry that we tout so often? Give me a break.

At this point in time, so many organizations are reviewing budgets, spending plans and job duties. People are being laid off. No insurance benefits. No housing. Nothing. Yeah, Happy Thanksgiving.

With these lay-offs comes an increase in crime but wait, the police and fire departments have been cut also. I'm feeling a lot more like Mad Max. Anyhoo, in spite of what's happening, in the end, we must remain positive, prayerful and grateful. President Obama will not solve America's problems with the wave of a magic wand. Each of us plays a role in America's recovery. CEOs must sacrifice and set the example, Unions must compromise and American businesses must return jobs to American workers.

The President's Power to Pardon 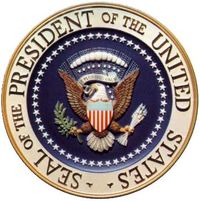 Thus far, President George W. Bush has pardoned 14 people as his tenure ends as commander-in-chief of the United States. Those pardoned were convicted of various crimes including theft of government property, tax evasion and embezzlement. Should you think something wrong with that, know that President Bush has pardoned far fewer individuals than previous presidents.

For background information on the power of the President to grant a pardon, here's an excerpt on presidential pardons provided by the University of California's Institute of Governmental Studies.

Article II, Section 2 of the U.S. Constitution gives the president "Power to grant reprieves and pardons for offenses against the United States, except in cases of impeachment."  A reprieve reduces the severity of a punishment without removing the guilt of the person reprieved.  A pardon removes both punishment and guilt.

As judicially interpreted, the president's power to grant reprieves and pardons is absolute.  Individual reprieves and pardons cannot be blocked by Congress or the courts.  The Framers of the Constitution envisioned the pardon power has having a narrow purpose in times of war and rebellion.  The president might offer pardons to rebellious factions as an inducement for a laying down of arms and national reconciliation.  Alexander Hamilton argued  in the Federalist Papers (No. 74) that "in seasons of insurrection or rebellion, there are often critical moments, when a well-timed offer of pardon to the insurgents or rebels may restore the tranquillity of the common wealth; and which, if suffered to pass unimproved, it may never be possible afterwards to recall."

The pardon power has been used as the Framers foresaw:  George Washington pardoned leaders of the Whiskey Rebellion, and Andrew Johnson pardoned Confederate soldiers following the Civil War.  In 20th century, Jimmy Carter pardoned those who had evaded service in the Vietnam War.

Many pardons have been controversial.  Perhaps the most controversial was Gerald Ford's preemptive 1974 pardon of Richard Nixon for his actions in the Watergate Affair.  More recently, George Bush's 1992 pardons of six Reagan administration officials involved in the Iran-Contra Affair, including Defense Secretary Caspar Weinberger, generated considerable negative comment.

The Verizon Wireless employees who breached the cell phone records of President-elect Barack Obama, have been fired according to reports from company management.

It seems the employees were hired to do customer care and authorized to access customer records unless specifcally directed by the customer.

Verizon management really had no choice in this matter if they were to retain customer confidence. It was also reiterated that the cell phone records compromised were for a simple flip phone and not for Obama's Blackberry or other sophisticated equipment. No e-mails or voice messages were accessed.

Here is a beautiful song with photos that capture Barack Obama supporters on famous bridges throughout the world. Garrison Davis is the songwriter. Purchase the song at: http://cdbaby.com/cd/garrisondavis2.