The Illusion of Safety in Our Food and Finances

The talk of stimulating the economy of the United States and whether the bill should include more or fewer tax cuts or the pork included in the plans will move the economy and the ridiculous actions of the Republicans contribute to this county’s lack of progress.

I mean the result of this entire situation of unabashed greed and lack of oversight makes me first want to scream and secondly, sue somebody. I know that will not likely happen but, come on, someone had a responsibility to make sure that law-abiding Americans didn’t find themselves broke, out of work and standing hundreds deep for a few job openings.

It’s just not right that the agencies and charged with protecting American citizens didn’t live up to their part of the agreement. As I write this, and fight off flu-like symptoms, I can’t help but wonder if I haven’t been poisoned by eating tainted peanut butter.

The continuous reports of filthy food production conditions in this country and the lack of proper testing of imports are downright frightening. We have little to depend outside of prayer.

Don’t get me wrong, I realize that prayer is a powerful action but if we are left to pray as a means of attaining protection then why do we need the folks in the government? End of story.

Daschle Withdraws from Consideration for Cabinet

Former Senator Tom Daschle withdrew his name from consideration as the Health and Human Services Secretary. It's really unfortunate but the issue of non-payment of income taxes just wouldn't seem to go away.

When he immediately paid the $128,000 to satisfy past amounts due and penalties, I knew he would not get the support of the American public and the controversy would continue.

Too many Americans are suffering and issues that may not have received such media attention in the past are tanking political opportunities now.

As cool as President Obama is, he must really be ticked off. Income taxes and his nominees have been way too much drama for President 'No Drama' Obama. Stay tuned.

Though his legal defense fund it has been reported overdrawn, Kilpatrick's new attorney is high-powered Florida attorney Willie Gary.

The Republican National Committe is attempting to upgrade its public image with the election of Michael Steele to head the GOP for the next two years. Do you think Steele will help the GOP attract minority voters? The race to fill the Florida U.S. Senate seat currently held by Mel Martinez is more interesting as the most promising Republican thought to be able to win has declared he will not seek the seat. Florida Attorney General Bill McCollum, like Florida CFO Alex Sink and U.S. Rep. Allen Boyd, will seek re-election to his current seat. 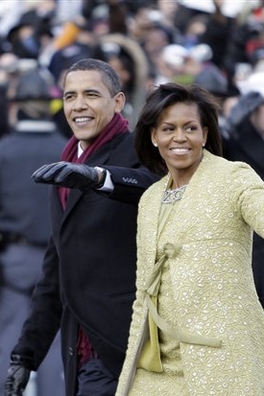 It has been reported that First Lady Michelle Obama will use Pottery Barn furnishings to decorate daughters Malia and Sasha’s bedrooms. Why this is such news is beyond me but I’m an fan of HGTV so I’ll go with it for a little while.

Mrs. Obama’s fashions and White House decorating choices are obviously interesting to some folks but far too much emphasis is being placed on matters that are not politically significant.

It’s obvious that the President and the rest of the First Family are changing Presidential culture. He is trying to live outside the bubble more than in and he’s demonstrating frugality by virtue of his decision to keep that ugly Oval Office rug when most presidents have replaced it in the past.

The world was abuzz when Michelle Obama wore J. Crew and Barack Obama uses a BlackBerry and chews Nicorette gum. Now Pottery Barn will be in the spotlight.

Surely, Mrs. Obama and her designer will select beautiful furnishings for the girls. Now, let’s get back to important news.