Congratulations to The Washington Post's Eugene Robinson on winning the Pulitzer Prize for his commentary during the Barack Obama presidential campaign.

There's an ongoing poll on MSBNC asking readers to give President Obama a grade on his performance thus far. As you may know, he is fast approaching the end of his first 100 days as leader of the United States of America.

Here's a snapshot of the voting so far. 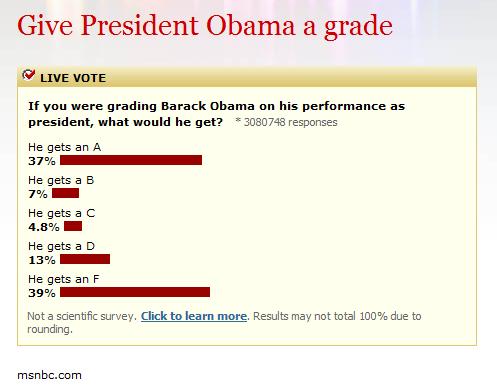 These results don't comport with the results of the CNN poll or other poll results I've seen but we'll check the results again Wednesday morning.

If you feel so compelled, vote now. The President's first 100 days expire on Wednesday, April 29; be sure to watch his news conference that evening. 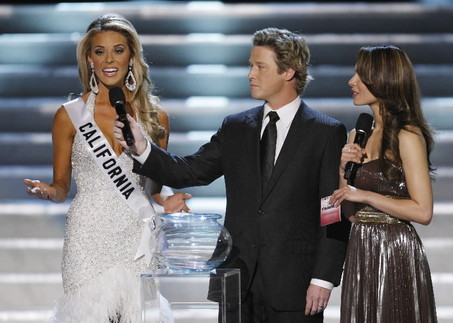 Insanity is doing the same thing the same way over and over again yet expecting different results. Such is the lesson not yet learned by the GOP (especially former Vice President Dick Cheney) when it comes to President Barack Obama's admiration by the rest of the world.

How much longer will the proven ineffective lines of attack be used by the GOP? *Yawn* It's so boring. old and tired.

Try as some folks might, no one is really fooled about the actual intent of last week's nationwide Tea Bag protests. Clearly, the protests were aimed at President Obama and not about his policies, so to speak. Some folks also tried to paint the effort as highly successful, which it was not.

Mainstream media has inundated readers, listeners, and viewers with coverage of recent Somali piracy incidents off the waters of Africa. America waited anxiously for the outcome of the hostage situation that saw Maersk Alabama ship Capt. Richard Phillips in custody for five days.

The captain regained his freedom because of the successful execution of a rescue plan by Navy SEALs and a host other folks. The three captors on the lifeboat with the captain were killed and one captor was taken into custody. This post is not so much about that particular incident as much as why it occurred in the first place.

As an American and citizen of the world, I was a bit perturbed that such a widespread and lucrative illegal industry has existed for almost two decades. What's up with that? The millions of dollars lost to pirates and the hundreds of sailors held hostage was as newsworthy when the incidents started in the early 90's as it is now.

Unfortunately or fortunately, depending on your perspective of this issue; the four pirates on the Alabama picked the wrong ship to rob. The media onslaught was tremendous. Resolution of this hostage situation would be televised, tweeted and broadcast using all mediums available. After all that hoopla, piracy continues.

One has to wonder, even as lucrative as piracy has become, why the Somalis are involved in piracy in the first place. The obvious answer is the money but there is another side to the situation that needs equal coverage.

Quite simply, commercialized fishing by other countries decimated Somalia's fishing industry and many Somalis are merely trying to survive. There are also reported instances of industrial pollution and shootings of innocent Somali fishermen. The Somali piracy issue is more complex than some may want known to the public.

When all is said and done, a happy medium must be reached because the world cannot tolerate the lawlessness of the pirates; the Somali people need economic viability and a stable government. Let's not kid ourselves; conceptually, the actions of the Somali pirates are the same as the robber barons of Wall Street.

Somali pirates not due to weak government

Everyone is entitled to their own opinion but what is to be gained by such an action? Let's see, Barack Obama was elected President of the United States; John McCain was not. Let's get past this foolishness and work together as Americans.

President Obama has already proven his academic prowess and his accomplishments are well-documented. ASU does itself no favor by withholding an honorary degree from someone as learned as President Obama. The continuous personal attacks on the President rather than addressing issues this country needs to overcome is old, boring, and counterproductive. It also strengthens President Obama's favor with most Americans and the rest of the world. 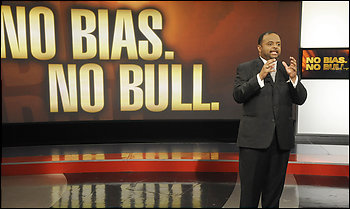 A couple of offline friends reminded me that I'd neglected to mention Roland Martin's new gig on CNN serving as host of "No Bias. No Bull." while Campbell Brown is on maternity leave.

It goes without saying that Martin is one of my favorite political commentators. Yeah, I probably should have written something about his new gig and to that I say, my bad. I do wish him the best in this new role (I really don't know how he has the energy for so many jobs.) although I'm not really feeling the Saturday night time slot that Martin is slated to get for his own show.

Anyhoo, the Roland Martin discussion got me to thinking about other folks that I like watching and listening to. I don't always agree with their opinion but I do like hearing what they have to say and the delivery of the logic behind their position. Here's my list of faves. Who's in your Top Ten?

She was quite a lady and well-known for her love of major league baseball. I have not been a Keith Olbermann fan long enough to know of her getting beaned by Chuck Knoblauch and the subsequent celebrity to follow. She seemed to be quite feisty and a lot of fun to be with.

My prayers are with Keith Olbermann, his dad and the rest of Marie Olbermann's family, friends and loved ones. Ashe'.

Desperation and the Economy 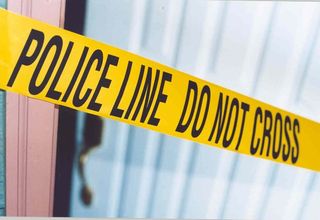 Too many people in America seem to have lost their minds and it’s not even summer yet. Every couple of days we hear of a murder somewhere in America and that is very discomforting.

Heck that father taking his nine year-old daughter on his robbery of a convenience store and the elderly female who’s been robbing banks are a sign of the times. It’s a shame that folks have been forced to such levels of desperation. Americans are not accustomed to such struggle and sacrifice as this economy has imposed upon us.

It is crucial that we are more attentive of the moods of our family, friends and co-workers. These are desperate times and far too many have resorted to crime because they don’t have money to pay bills and other necessities. Not being able to provide for family makes many, especially men, feel worthless.

The sad reality we are faced with is that we must be aware of the personal casualties of our economic downfall. Innocent people will become collateral damage and in some instances little can be done to prevent such actions.

We can talk gun control and other measures but there are no 100% preventive measures available now. We can and should pray this crisis is lifted soon and then pay more attention to signs of mental stress in our family and friends. Be safe and not afraid.