The Successful Launch of OWN --- the Oprah Winfrey Network [VIDEO] 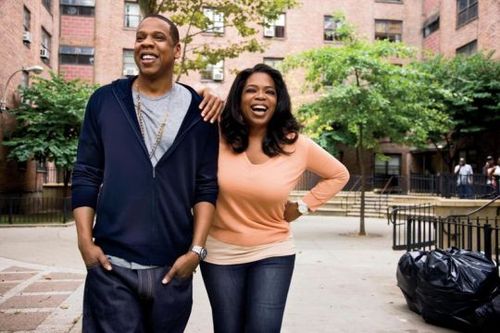 OK, Oprah Winfrey is my hero --- for real. Her amazing risk to start a new television network and not rest on her talk show laurels has garnered another win. This new network is fabulous. It’s the Church of Oprah 24/7 and that’s not a bad thing especially since so many people watch FOX-News. OWN is the antidote. Yeah, I went there.

The Behind the Scenes show is predictable but still interesting to watch. Some of the other entries on the OWN  schedule: searching for; Kidnapped by the Kids; Enough Already with Peter Walsh and Miracle Detectives are also nice but by far my favorite is Master Class. The first subject/teacher interviewed was Jay-Z and I have to tell you I was impressed. So impressed that I’ve seen it twice and probably on my way to seeing it again.

I know Jay-Z is a music icon; super rich and married to Beyonce. Beyond that, I’ve not been much of a fan. I do like his song “Hard Knock Life.” Since Oprah’s Master Class, I definitely respect Jay-Z. He is a personification of the result of the 10,000-hour theory discussed in Malcolm Gladwell’s book, “Outliers.” This young man, no different from someone like Tiger Woods, started early in mastering his craft. With a boom box purchased by his mom and a semi-handcrafted notebook given to him by an aunt, Jay-Z, born Shawn Carter, learned the power of words.

Now, I figure that there are more Jay-Z’s caught up in America’s public housing system; public school system and the penal system. With proper focusing of talent, these young people may be able to transcend poverty and other societal ills if given the opportunity.

Jay-Z made so many profound statements during this hour-long show. He talked of the future of hip-hop; failure and success; goal setting and the power of music to combat racism among many subjects. It will be difficult for anyone to follow Jay-Z in the Master Class series and have the impact that he did. I read Twitter and Facebook comments about his episode and many viewers were impressed.

Some will likely complain that Oprah is too preachy and caters to whites but Oprah is just being Oprah. Everyone should have a purpose in Life and be true to him or herself. Oprah is a brilliant woman. Her messages are positive and most of the time transcend race to show the humanness and sameness in all of us. She knows her audience and knows the formula that works. With the everyday American citizen still reeling from the economy and other challenges, a little Oprah is good and a lot of Oprah is what we need. There is power in words and when combined with action, allows us to overcome anything. Thank you, Oprah. I am grateful to experience my OWN channel during my lifetime. To God be the glory. Now let the Church say Amen.

It’s difficult to find something wrong with this message but surely someone will. I don’t agree with all of the President’s decisions but I respect and support him as our leader. We shall definitely sink or swim together unless our elected leaders make decisions that benefit the people rather than those of lobbyists and business interests.

Welcome another new year overflowing with opportunities to meet more people; do great things and make the world a better place for all of us. Get ready to rock 'n roll with me as we take this ride through 2011. We will talk about a little of this and a lot of that. We know how the previous year ended politically and with 2012 fast approaching, the madness will probably heat up.

I'll do a lot more mo-blogging as I explore using the iPad so 2011 will surely be fun. TTYL Smooches...


- Posted using BlogPress from my iPad