Joe Rickey Hundley of Hayden, Idaho is accused of saying "Shut that nigger baby up!" as 19 month-old Jonah Bennett cried aboard a Delta flight to Atlanta. Hundley slapped the boy across the face.

Aerosapce executive Joe Rickey Hundley, 60, was accused of slapping a crying 19 month-old boy and referring to the child as a 'nigger' aboard a Delta flight headed to Atlanta from Minneapolis on February 8, 2013. Hundley admits to requesting the baby be quieted down not slapping the child and using the racial slur. Jessica Bennett, the baby's mother, said he uttered the racial slur twice. The toddler is the adopted child of Bennett and her husband who are both white.

Since the incident, Hundley was suspended and later terminated from his position as president of AGC Aerospace and Defense. The company offered an apology without actually mentioning Hundley's name.

Without rehashing every detail reported regarding the incident, it's important to note that Hundley was described as being intoxicated. Bennett said he "reeked of alcohol" and consumed more on the flight. It was also reported that Hundley complained the child was too big to ride in the mother's lap. Bennett said she stood during the flight. The incident occurred as she took her seat to prepare for the plane's descent.

Hundley was later charged with simple assault on a minor. If convicted, he faces up to a year in jail. Hundley's attorney, Marcia Schein, said her client will plead not guilty. Really? I'm sure you're equally as a curious as I as to why Joe Rickey Hundley wasn't charged with a hate crime in addition to simple assault? I'm not an attorney or law enforcement but surely Joe Rickey should also be charged with child abuse and a litany of other charges that this "alleged" crime warrants.

Here's something else to think on. While mainstream media makes a big deal out of Joe Rickey being fired. Don't get excited. Considering his age, Hundley could have been allowed to retire and been given a nice severance package. As expected, AGC declined to release details of personnel issues.

While the Bennett family has been traumatized by this incident and prayerfully little Jonah will not suffer from this psychologically in the future,  surely Joe Rickey Hundley has family and/or friends who are horrified and/or embarrassed by this incident also. It's one thing to be racist towards an adult, but to be racist and verbally and physically assault a 19 month-old child? Come on, Joe Rickey, really? 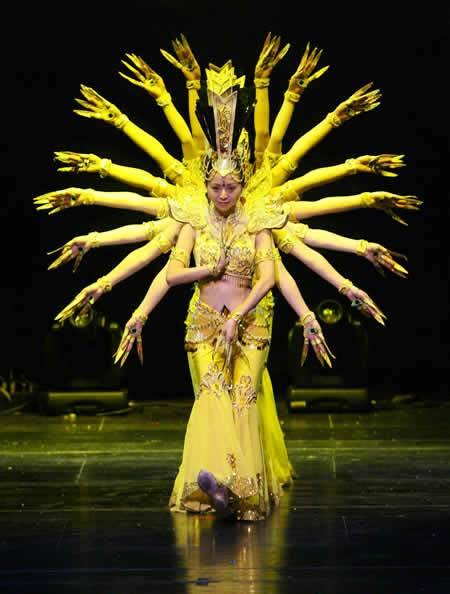 It has been quite some time since I’ve watched a video of the Thousand-hand Guan Yin. It is a beautiful almost mesmerizing dance. I surfed across the dance on the internet about seven or eight years ago and watched it several times before researching its background.

Initially, the video appears to be generated through computer graphics. When one realizes the dance is performed by a troupe, their precision and execution is all the more amazing. What is even more amazing is that it is performed by the China’s Disabled Peoples Arts Troupe --- all of the dancers are deaf.

Guan Yin is the bodhisattva of compassion, revered by Buddhists as the Goddess of Mercy. Her name is short for Guan Shi Yin. Guan means to observe, watch, or monitor; Shi means the world; Yin means sounds, specifically sounds of those who suffer. Thus, Guan Yin is a compassionate being who watches for, and responds to, the people in the world who cry out for help.

Bodhi means wisdom or enlightenment; sattva means being or essence. Put the two together and you get bodhisattva, a being who is enlightened and ready to transcend the cycles of birth and death, but chooses to return to the material world in order to help other people reach the same level of enlightenment. This is the ultimate demonstration of pure compassion.

The thousand hands of this bodhisattva represent Guan Yin's many abilities to render assistance. There are a thousand eyes on these hands which give Guan Yin great powers to observe the world. Guan Yin also has many faces so she can become who people need her to be, not necessarily herself, because her help is given in a way that is literally selfless.

President Obama's Call for a Vote on Gun Control [VIDEO]

I confess that I cried during this portion of the President's State of the Union address last night. It's baffling that some politicians chose to remain seated as a sign of non-support.