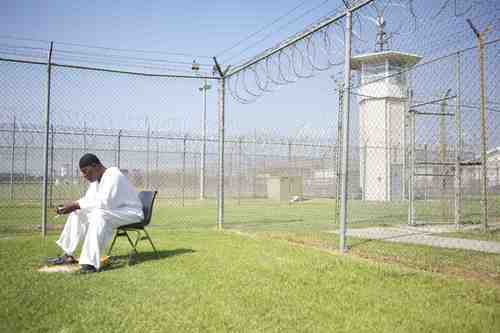 "We're supposed to correct deviant behavior, that's what corrections is. I can teach you skills and trades and I'd just make you a smarter criminal, unless we get something in your heart -- unless we become moral. The criminal person is a selfish person who gets whatever he wants by taking it. The way to be the opposite of that taker is to be a giver; the ultimate gift is to be the hospice caregiver. Hospice is a test. Have you changed or have you not? This is your way to prove it."  ~ Burl Cain, Warden, Louisiana State Prison at Angola

Last night I watched a documentary called “Serving Life” via Netflix. It is a documentary by the Oprah Winfrey Network and narrated by Forrest Whitaker. Now I should have been focused on projects on my to do list but I surfed across this film. I wanted to turn it off but I couldn’t. I was mesmerized by the beauty, dignity and humanity in a place that I’d only heard horror stories about --- Angola Prison.

The film is about a program started by Warden Burl Cain that allows inmates to volunteer to take care of fellow inmates in hospice at the facility. It may sound simple enough but it is a commitment. Feeding, bathing, grooming and changing diapers of another adult male is not something everyone can do. Regardless of the setting, being a caregiver at that level requires a person to be totally unselfish. For the inmates accepted into the program at Angola, it is an opportunity for redemption.

Through the film we learn of the situations, lifestyles and choices that lead these men to their existence. It’s sad, no, overwhelmingly depressing. They don’t blame anyone but themselves for ending up incarcerated. Since the average sentence is 93 years, chances are very high that most of the inmates will die in Angola.

The film shows men taking their last breath. It’s It also shows the dignity in their burial. Some people may think they are not entitled to such dignity because they are criminals.

I encourage everyone to see this film. It might even be more effective than the “Scared Straight” reality show.