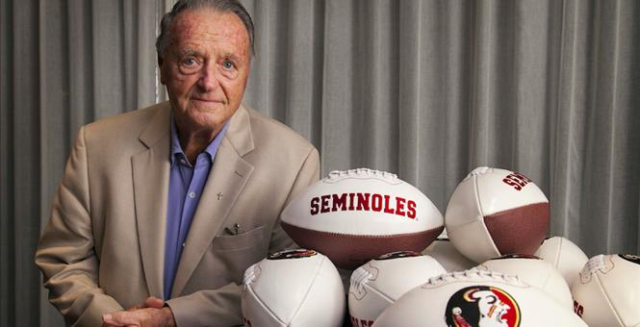 So, at a rally in Tampa, Florida last Monday evening, legendary Florida State University football coach Bobby Bowden formally endorsed Donald J. Trump for President of the United States of America. Greeted by the crowd with the FSU tomahawk chop, it was both sad and disappointing but not at all surprising. It was a surprise that so many people, particularly Blacks, are surprised that Bowden endorsed a narcissistic, racist, misogynistic, xenophobic, emotionally unstable, sexual predator to lead this nation.

Just add Bowden's name to the list of famous athletic coaches that are on the Trump train including Bobby Knight, Mike Ditka, Rex Ryan, Mike Leach, and Lou Holtz. These coaches can be pleasant, even charming when recruiting young black men to play sports for them. They sometimes refer to young black men as "son," but the athletes are never seen as more than tools to win championships. Thus, the low prioritization of academic achievement and personal development of the athletes beyond the football field. The athletic championships can translate to obscene amounts of money for everyone else except the athlete unless he manages to make it to the professional level.

Rumors of Bowden being racist have persisted for years. His endorsement of Donald Trump, even under the guise of religiosity appears to confirm those rumors and gives rise to more concerns about how he views women also. One would be shortsighted not to wonder about the current culture at Florida State and its football program. These negative perceptions didn't develop overnight and won't change quickly either.

Florida's capital city, Tallahassee, is also the home of Florida State. It would also be prudent to believe that elected and business leaders in Florida who endorse Trump share his perspectives on ethnic minorities, women, and immigrants. It is what it is, let's not kid ourselves.

Sadly, at the end of the day, for the love of money and dreams of fame and fortune, many Black parents will still entrust (pimp out) their young sons to the likes of Bowden and other coaches who share his white supremacist and misogynistic perspectives. Are the majority of American voters with Bowden on the Trump Train? I don't think so. We will find out November 8. 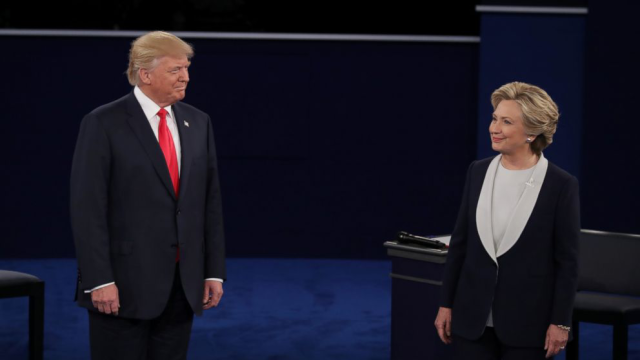 You know the old saying that politics is never personal? Well, that was not the case last night at the second 2016 presidential debate. When presidential candidates, Hillary Clinton and Donald Trump, did not shake hands at the beginning of the debate last night, it was crystal clear that the atmosphere would be contentious. ABC’s Martha Raddatz and CNN’s Anderson Cooper did a decent job in keeping the candidates on task and the audience quiet. It appears to be difficult to get Trump to answer questions directed to him. He typically relies on deflecting, rambling and providing incoherent responses.

The pre-event hype probably resulted in a let-down for viewers who tuned in expecting a volley of salacious attacks. It could have gone in that direction but Clinton wisely didn’t take the bait. She was cool, calm, confident and in control of herself. She allowed Trump to hurt himself. Trump performed much better than in the first debate but that wouldn’t take much because he performed so horribly in that one. Clinton was presidential and Trump was uncouth. Her answers addressed policy and specifics. Trump was arrogant. He knows the Tax Code better than any other candidate and he knows more than any General. He should have known his disgusting conversation was being recorded by Access Hollywood in 2005 but let me not digress. It appeared that Trump’s debate strategy was to personally attack the Clintons at every opportunity and to give superficial answers to policy questions.

Donald Trump’s candidacy continues to be a major scam portrayed on the American public. The Republican Party and mainstream media are complicit in his being so close to becoming the President of the United States. So the Republican Party and mainstream media can kick rocks and suck it up. You created this monster, so deal with it. Donald Trump has been who he is for decades. The incredulity of folks who are so surprised by documented revelations of Donald Trump’s sexual assault of women is nauseating.

In spite of claims by Trump supporters, Clinton clearly won last night’s debate. Trump stalked Clinton on the stage. He also whined, interrupted and didn’t answer questions. He also threw Mike Pence under the bus, backed the bus up and ran over Pence again. Donald Trump should never become President of the United States.

Well, there is one more debate scheduled for October 19. Surely more political bombs will drop by then. Stay tuned.