The Legacy of Donald Trump: Distract, Divide and Destroy 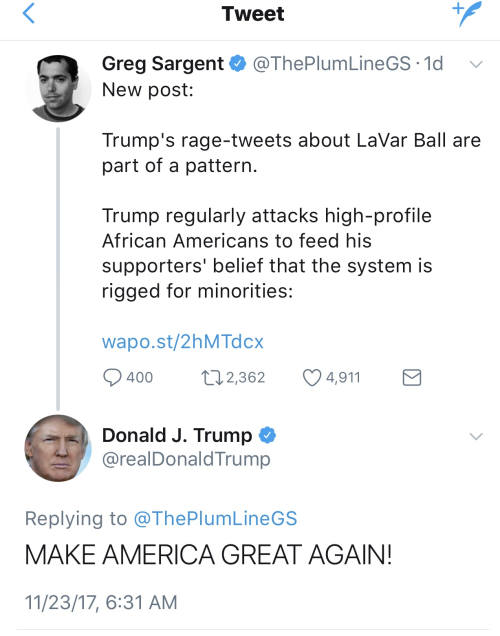 Stoking the flames of racial hatred and fear. Donald Trump continues to distract and divide Americans while pandering to his base of white voters by verbally attacking well-known blacks. President Barack Obama, Jemele Hill, Colin Kaepernick, Marshawn Lynch, Steph Curry, Congresswoman Frederica Wilson and Merck VP Kenneth Frazier. Still no clapback when Eminem skewered him in a vicious rap or when Tom Brady didn’t visit the White House with his teammates. It is what it is and Trump is who he is.

Trump’s latest black target, LaVar Ball. Why? Because Ball won’t bow down and kiss the ring (and posterior) of The Donald. Trump claims responsibility for the release of Ball’s son and two other college basketball players caught shoplifting in China. Ball claims to have folks on the ground in China that worked on the release of the players.

Instead of Trump showing class, he again showed himself to be crass. Really? Behind lack of what he perceived as proper deference to the president? Wow, that’s pathetic.

Donald is going to “MAKE AMERICA GREAT AGAIN” by putting Negroes in their place. Unbeknownst to his base, Trump needs to keep his base angry with blacks so he can continue to get rich while his base remains poor or must deal with an economically fragile position.

Keep the blacks and whites separate so they don’t realize their power together. Distract, divide and destroy America. That’s the Trump way.