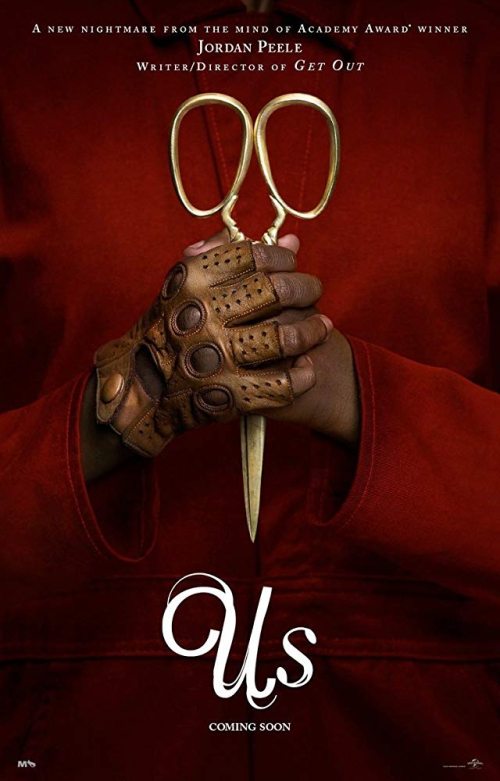 Instead of writing about Christmas, Jordan Peele has me writing about the creepy trailer for his upcoming film, “Us”. This is his follow-up to his smash hit “Get Out”. If the movie is half as good as the trailer, he has another hit on his hand. The visuals are stunning. The music is haunting.

Us is more of a traditional horror film than Get Out. It's not exactly the type of trailer one would expect to debut on Christmas Day. Thanks, Jordan. I will definitely be sleeping with the lights on for a while and I can never hear the song “I Got 5 On It” without thinking of this horror movie.

Let me start off by saying I am so stoked that Lupita N’yongo (Black Panther, Twelve Years a Slave), Winston Duke (M’Baku from Black Panther) and Elisabeth Moss (The Handmaid’s Tale) star in this movie. I love their work. N’yongo and Duke play Adelaide and Gabe Wilson. Young actors Shahadi Wright Joseph, Evan Alex and Madison Curry seem to hold their own on screen also.

So, from what I can gather from the 2:29 trailer, the protagonists, the doppelganger family had been incarcerated based on their prison jumpsuit attire. I can imagine it has something to do with the carnage scene on the beach at about 1:51 of the video. For sure most of what Jordan Peele includes in a movie is purposeful. The symbolism of the white rabbits, mask the son Jason wears that makes him look like the namesake character from Friday the 13th, the huge gold scissors, and the little black girl who has a doppelganger but is not included in the family of four in the jail jumpsuits. Oh yeah, what’s up with Lupita’s character telling her son to get in rhythm when she is so off beat herself? I have questions.

“Us” doesn’t open officially until March 15, 2019. Tickets are already on sale online at a few theaters. I plan to be at a theater on its opening weekend and more than likely I will watch more than once.

This movie is not about race but I do want to give a shout out to Jordan Peele for the Howard University sweatshirt Winston Duke’s character wears and for the ethnic hairstyles and dark-skinned Black female characters. It might not seem like a big deal but it is. Representation matters.