Here is a video of Bill Press guest hosting the Countdown with Keith Olbermann Show. So, a CNN producer warmed up the crowd at the presidential debate in Charleston, SC. encouraging the audience to make as much noise as possible as if the debate was The Jerry Springer Show? Shame on CNN.

You know it really doesn’t matter who the Republican presidential nominee is, President Obama will clean their clock.

Tancredo Does It Again and The Truth About La Raza

Former Colorado U.S. Congressman Tom Tancredo ignited controversy here in Miami almost three years ago with his characterization of the area as a third world country. He made other statements that were far from complimentary and let's just say things got ugly. He's now surpassed that deed bycalling Supreme Court nominee Sonia Sotomayor a racist because she is a member of the Latino civil rights organization, La Raza. He went on to equate La Raza to the "KKK without the hoods or the nooses."

La Raza chief Janet Murguia disputed Tancredo's description of the organization and refuted his translation of the group's name and motto among other things.

The Translation of Our Name: National Council of La Raza

Many people incorrectly translate our name, "La Raza," as "the race." While it is true that one meaning of "raza" in Spanish is indeed "race," in Spanish, as in English and any other language, words can and do have multiple meanings. As noted in several online dictionaries, "La Raza" means "the people" or "the community." Translating our name as "the race" is not only inaccurate, it is factually incorrect. "Hispanic" is an ethnicity, not a race. As anyone who has ever met a Dominican American, Mexican American, or Spanish American can attest, Hispanics can be and are members of any and all races.

The term "La Raza" has its origins in early 20th century Latin American literature and translates into English most closely as "the people" or, according to some scholars, as "the Hispanic people of the New World." The term was coined by Mexican scholar José Vasconcelos to reflect the fact that the people of Latin America are a mixture of many of the world's races, cultures, and religions. Mistranslating "La Raza" to mean "the race" implies that it is a term meant to exclude others. In fact, the full term coined by Vasconcelos, "La Raza Cósmica," meaning the "cosmic people," was developed to reflect not purity but the mixture inherent in the Hispanic people. This is an inclusive concept, meaning that Hispanics share with all other peoples of the world a common heritage and destiny.

Tom Delay adds to the mayhem and foolishness and injects the name of LULAC. Hmmm... 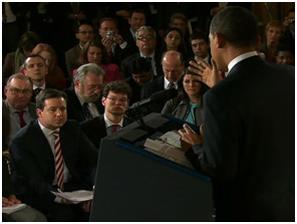 You know, I'm leery of folks who are too nice, too sweet or too cool. I think they're volcanoes that may erupt at any moment and are difficult to calm down. I'm not saying they're crazy or anything like that just that they may not be able to control their anger once their button is pushed.

I've had those concerns about our nation's president. It seemed all too unreal that he didn't go off on someone --- pick any of a number of folks --- who tried to anger him during the campaign. There were some times when a couple of Democrats and a few Republicans seemed to deserve a pimp slap, if you ask me. But our President played it cool. He also stayed on message and his strategy was successful.

There were a couple of moments during debates when it was obvious that he's no pushover but he still seemed too reserved to me. I understand the rationale. I get it. He couldn't play the angry black man role and he didn't. I think some folks got that twisted.

Enter one CNN reporter Ed Henry who felt the obviously controlled wrath of President Barack Hussein Obama, Jr. I shudder every time I hear/see that exchange and the President's response. President Obama gave one of those looks that your mama gave you when you were a little kid in church and you're moving around too much or talking too much or heaven forbid, chewing gum.

Some folks in mainstream media have tried to paint the President having lost his cool during the press conference; I think not. He was so cool that he was borderline frozen. Do you need to see that look again?

If anyone doubted that the president was tough enough; last night should have sent a different message. I don't think we would want to be on the receiving end of when and if he does lose his cool.

In the meantime; I'm glad the exchange occurred between and Ed Henry. Let that be a lesson for the next press conference. You know Ed Henry has taken some ribbing from his colleagues and probably got chewed out by his bosses. What's done is done. Now, don't try any of that shoe-throwing business with this President, OK?